You should be on Google+ too.

Really Edla are you an idiot? you might be thinking,

First of you all, if you aren’t on Facebook, I am already considering you hopeless, and I hope you have your resume in order, because your cushy office job, might just disappear for you in 10-20 years, and you will be asking yourself, “what happened?”
The first thing an oldie will blame is the new young boss who fired him/her. Well you were given the opportunity to join Facebook, in fact the youth looked at you funny when you said you have never looked at it. (I just had to listen to a conversation of 40 somethings say that to each other, so tempted to lean over and say, “I hope you have good retirement accounts, because you won’t last more than 20 years with that kind of thinking”)
But I won’t, just like when I was in the TSA line, and the putz scanner, pushed everything forward and flipped my laptop out of my bin., hmmm I bet that oldie isn’t on Facebook, but I bet he has an email account,

Enough about Facebook, that is a done deal. Be on it, or give-up on your american dream of being rich. Google+, I was at a google publisher conference, and the theme was more about google glasses and coffee pots, google search the coffee maker problem to find out what i’m talking about , it might be on a Lays potato chip though,

But the change for online publishers on Google+ is incredible. I take my words back on Ebay’s decision to stop advertising or recommend it for ad words. Why do i need to pay for top bill advertising on your own search term. Well that was the way you use to have control of what text google put. But with Google+ you can now control the whole side bar, so far i’ve discovered the best option is to insert a google+ on your
, and so far my edla.com recommendation is to upload images on your
. Wow, I love that, google “Hooda Math” and you will see what i’m talking about.
So as an
business. Google+ is the best free advertising i’ve seen in a long time, I’m talking $1000 worth a day minimum for me, and for Coca-Cola i’m talking $100,000 of free advertising. google: coca cola, they know advertising
So anyways, i was updating my free google advertising, when i caught myself commenting on  my friends posts, and maybe even opening a chat session on g+, and realized, i wasn’t on facebook, and hey this isn’t even half bad. 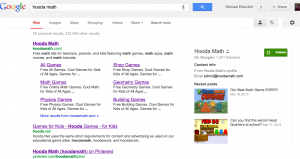 Posted by Michael Edlavitch at 7:29 AM